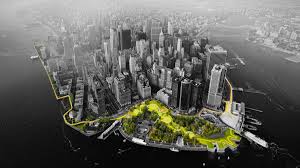 Imagine, packing up your New York home to get ready to move to another state. You will be leaving everything that you love about t New York including your friends and family. You will miss it all. The hardest part is that you are moving not because you want to but because you have to. Why would you have to move? Global Warming and Climate Change created such as shift you can no longer stay for your safety and well being (not to mention the taxes too).

Global warming and Climate Change will impact the way we live in New York in ways that we can’t imagine today. From continuous flooding (just like we lived through with Hurricane Idea) to heat strokes and increased deaths. Other ways that we might not be able to prepare to include the facts that you cannot afford the flood insurance you are now required to carry or even worse, they won’t offer it to you because you are now considered in a flood zone. Basement apartments can no longer be rented due to concerns over flooding, creating an even tighter housing market which is already unaffordable within the State.

Water quality is impacted, Although New York is moving toward regulations that would lower the concentration of chemicals found in the water, it’s not entirely removing the threat. As a result, millions of New Yorkers will remain vulnerable to the harmful effects of these chemicals in drinking and bathing water.

The threat is very real, enough to bring attention from our leader and create dedicated plans to help curb the damage already done. New York has an ambitious plan to eliminate greenhouse gas emissions by 2050.2 This plan is a big step in the city’s efforts to be an advocate for the Earth’s health. Do you know what this plan is? Have you read the plan? The Climate Leadership and Community Protection Act, which requires New York to get 70% of its electricity from renewable energy sources, like wind, solar, and hydropower by 2030.

We understand that the State of New York cannot do this alone, and our goal at ABEST is to New York residents with 100% renewable electricity supply. Our focus has been to educate and help New Yorkers do their part to reduce their carbon footprint by offering eco-friendly products and services. Renewable energy is directly tied to the act that the State approved Taking small steps to reduce your carbon footprint is easier than many know or understand. The risk of not doing your part is MUCH greater and there is no reward.