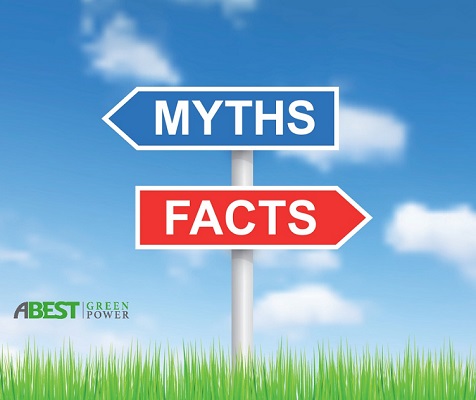 Renewable energy has had its fair share of myths and rumors surrounding its benefits — just like any other new technology would. But as history reveals, many of these myths have no merit, and people disregard them anyway — especially when benefits outweigh possible drawbacks.

Once we push renewable energy myths aside, we can pass the clouded rumors enjoy the positive benefits of it — just like we do with any other new technology.

Wrong. Renewable energy — including wind, solar, hydro, geothermal, and biomass — has proven environmental benefits, but skeptics still try to test its validity. The argument is if we’re going to put stock into an alternative energy source, we want to make sure it’s worth our while. Using renewable energy is 100% better than using harmful fossil fuels to generate electricity and that is a fact.

Fact: The heat generation of wind power has no significant impact if the turbines are spaced out. Researchers from the Max Planck Institute concluded that:

“If wind turbines generate 5.75 terawatts, such power ultimately returns to the air as heat following electricity use. This heat does not depend on the electricity source; thus it is also released when coal, nuclear, and natural gas produce electricity. Such generators, though, produce additional heat due to combustion or nuclear reaction, and [fossil fuels] emit global warming pollutants. As such, wind turbines reduce direct heat and pollutant emissions compared with conventional generators.”

This question surprisingly comes up a lot: Why even bother with renewable energy when fossil fuel production still holds most of the electricity generation in the U.S.?

While the fossil fuel industry and renewable energy innovation may be rivals, our country needs both at the present time, and we benefit with the right balance of each. So, even though it isn’t yet feasible nor cost-effective for our energy supply to become sourced from renewable energy, there are still benefits to reducing our dependence on fossil fuels. International conflict and global warming are two areas where we stand to gain by reducing our dependence on traditional sources of electricity.

Proponents of this myth often cite outdated data to say that wind and solar power are too expensive and can only compete with fossil fuels because they are heavily subsidized. The truth is the cost of wind power has declined 70 percent since 2010, and will likely decline another 35 percent by 2035.  Solar energy prices declined 89 percent over the last decade and will likely drop another 34 percent in the coming decade.

Wind and solar power are now the cheapest sources of energy, period.

The declining cost of renewable energy is due to advances in technology, manufacturing, and installation, not subsidies.  In fact, subsidies for fossil fuels are 7 times higher than for renewable energy.

Before we debunk this myth, let’s review the “what-ifs” that come from the reliability of renewable energy sources.

What if we don’t have enough wind? Oceana, the largest international advocacy organization dedicated to ocean conservation, states that while wind is not a perfect energy source, it is reliable. Where winds die down one place, they pick up elsewhere when there is large-scale distribution.

“Wind, combined with other renewables and a smart-grid, will be more reliable and emit zero carbon. This will stabilize energy prices and increase energy security all the while mitigating climate change.”- Oceana.

What if the weather is bad? Sunlight will still be harvested during the winter months, and with overcast skies from rainy weather, trickles of sunlight are still captured by solar panels. Solar panels are also sturdy enough to withstand strong winds from severe storms — even a hurricane.

What happens at night? While it’s true that solar-powered equipment works only when sunlight is present, energy demands continue to be met with surplus energy stored in batteries. Currently, battery storage systems are still a developing technology, so storage can be pricey. Thankfully, like any new technology, we’re confident costs will come down and the technology will become more widely available.

Currently, the industry uses the REC system to verify your nighttime energy usage. These are certificates created by renewable energy generators like us at Chariot that verify your energy is legitimately from renewable energy sources like solar and wind — even when the wind’s not blowing or the sun’s not shining at the time you need power!

Renewable sources are hands-down more abundant than fossil fuels; it’s just a question of accessibility and what is the smartest, most energy-efficient, and cost-effective means for harvesting and using its production.

Most people are naturally concerned about the welfare of animals. One of the complaints about wind farms is the number of bird deaths the turbines cause each year. The Department of Fish and Wildlife finds that wind turbines kill between 140,438 to 327,586 birds per year. However, measures are actively taken to reduce bird deaths, including:

Even then, it’s a truth universally known among scientists and researchers that climate change is the number one cause of bird deaths. According to the National Audubon Society, if climate change continues apace, hundreds of North American bird species’ ranges will shrink by at least half by 2100.

It’s Time We Leave the Myths Behind

As with any innovation, there are fears and concerns about how well it works or what the drawbacks are. While solar energy has its critics, we still maintain that the move to solar is a wise one. Sustainability matters and we make great strides when each person does their part.

Our goal at ABEST is to serve New York residents with renewable electricity to help reduce their carbon footprint. Our focus has been to educate and help individuals do their part too and help fight against climate change by offering eco-friendly products and services. Renewable energy helps to reduce emissions by creating a way to move away from fossil fuels, which contribute, to the greenhouse gasses.